The Kettering Charities for the Poor are a collection of charities providing help for local people. They are now administered by the Town Council on behalf of the Trustees.

The Town Council appoints four Trustees. These are currently

and there is an outstanding vacancy.

The Rector of SS Peter and Paul Church in Kettering is an ex-officio member of one of the charities.

a) The William Martin Charity exists to provide housing for elderly people without independent means. The charity owns a flat at The Lawns, Kettering, which is managed on its behalf by NNC Housing.

b) The Kettering Fuel Grants charity. This provides a grant to retired single people on a low income in Kettering and Barton Seagrave to help defray their fuel bills each year.

c) The Kettering Apprenticing Charity which provides grants to students and apprentices to meet unusual costs associated with their studies or to provide support and opportunities which are otherwise unavailable to individuals. 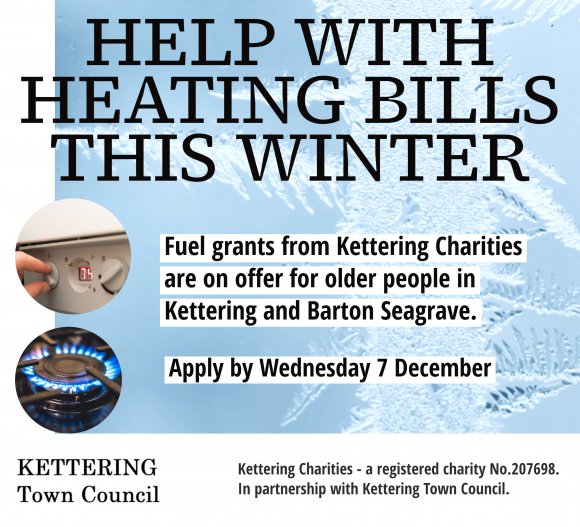 Fuel grants are awarded each December to people over state retirement age (66+) who live alone, and in the parishes of Kettering and Barton Seagrave. Applicants MUST be on a low income of less than £300 a week.

Application forms are available from clerk@ketteringtowncouncil.gov.uk or by ringing 01536 697490 during office hours or from here:-

An online form is here

or you can download a copy to print and complete by hand here:

You can send the completed application form by email to clerk@ketteringtowncouncil.gov.uk OR hand it in at the North Northamptonshire Council offices off Bowling Green Rd, Kettering or post them to Kettering Town Council, Kettering Conference Centre, Thurston Drive, Kettering NN15 6PB