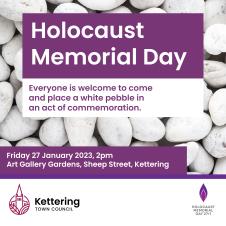 Victims of the holocaust will be remembered in Kettering this year as part of Holocaust Memorial Day.

The event will take place in the Art Gallery Gardens, off Sheep Street, at 2pm on Friday 27 January 2023.

Hosted by the Mayor of Kettering, Cllr Keli Watts, the event consists of a short, non-denominational service of remembrance for victims of genocide worldwide including the current conflict in Ukraine.

The Holocaust Memorial Flag will be raised during the service from the flagpole in front of the council offices in Bowling Green Road.

Cllr Keli Watts said: "Holocaust Memorial Day is a chance to stop and reflect and remember those who have died in atrocities around the world.

"We will be thinking of people who were murdered in the holocaust as well as those who have lost their lives recently in Ukraine and other conflicts around the world.

"Everyone is welcome to attend and lay a white pebble by the fountain in an act of commemoration."

The service will be led by the Mayor's Chaplain, Helen Wakefield-Carr and there will be representatives of the Christian, Hindu and Baha'I communities present.